It is annoying when you find windows update not working, stuck at zero or just asking for downloading same updates. It happens sometimes that your Windows Update fails to keep your OS unsafe without the much required updates.

You sometimes install a software and then try to install your updates. This causes some uncommon error interrupting your windows update. Just follow the two steps below to fix it :

1) Restart your machine once for the previous installation to complete.

2) Shutdown the machine and then switch it on again.

This works in most of the cases primarily where windows update fails after software installation. 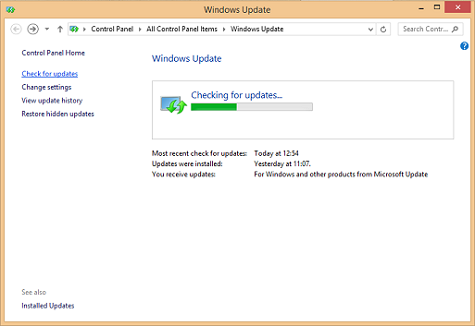 The most common error codes in case of Windows update failure are :

Microsoft has a automated fix that resolves this issue by performing required actions. But in some cases the solution fails to fix the issue. The Microsoft fix is available for Windows Xp, Vista, 7, 8, 8.1 and going forward should work for windows 10 also.

Windows Update fix that works in all cases:

The solution is simple and works in many cases where windows update gets stuck on the same update. Using this method we rename the Software Distribution folder which stores data downloaded via windows update. When the Windows Update service restarts another Software distribution folder is created and the updates get downloaded to this folder henceforth. Going ahead you can delete the SoftwareDistribution.old folder which takes up a lot of your hard disk space.

The above Windows Update Fix would work in most of the cases.